How to Cosplay Like a Human Being at Conventions

In reading one of the recent articles by Molly McIsaac on iFanboy.com titled "How to Behave Like a Human Being at Conventions", I have to admit to being put off by some of the things that were talked about and it is probably not how you would expect. 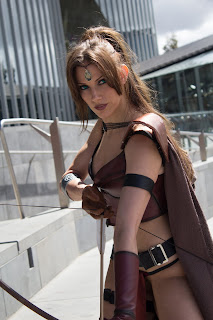 I am a cosplayer who has been costuming since 2000, and have been attending conventions in costume since 2002. I have experienced every type of behavior listed in this article while in costume at a convention. I have been hit on, groped, photographed without permission, had lewd comments slung at me and while I don't condone a lot of the demeaning behavior that goes on at a lot of conventions to women in costume (ie the "cup size" interview with Mandy Caruso at NYCC '12), there are a few key points that were discussed in this article that I would like to bring up.

I want to clarify that it is completely up to the cosplayer if she wants to dress as a more revealing "sexy" character or a more modest one. However, there is quite a difference in the type of response you will get at a convention.

In her article, Molly asks us "If you saw a stranger on the street, would you behave this way towards them?" and my answer is "Are they dressed in the same skimpy outfit showing the same amount of ass? If so, then yes! And most men would as well." Conventions aren't any different than bars or pubs or restaurants or any other public place. If you dress in a revealing manner, you are going to get at least a few people who do things like this. And guess what-- you cannot control it. Men will always be attracted to a great toned female ass or great cleavage or stomach or anything else.

In the subject of "No Touching!" I have a few things to say about that. There are some instances where touching is extremely inappropriate and wrong; case in point being butt touching. I have had this happen before at a convention, where a sneaky patron in a thick crowd grabs my butt, knowing that I will never be able to identify who did it. This is 100% wrong and is sexual harassment and can be prosecuted against. However, when a person asks me nicely for a photograph with a smile on their face, I am expecting them to put an arm around me if they want to, and most times I am the one who puts an arm around them. I like to be warm and inviting. Some people go lower in the waist than I feel is ideal but different people have different ideas of what is comfortable or not and I can sacrifice one moment of awkwardness to save a fan the embarassment of confrontation. I like to represent a idea of my character that is very personable and friendly. I want people to see a version of Lara Croft who enjoys being around people, as opposed to someone who is standing stiff armed two feet away from the person who is in the photograph with them. So if I must, I will grab their hand and move it away. It takes two seconds and not even a moment's thought. 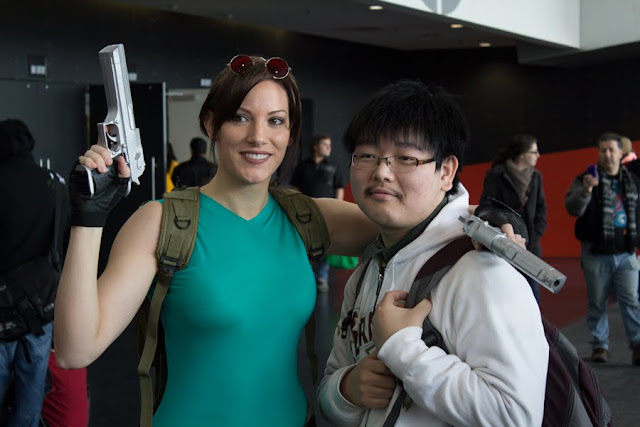 Being in cosplay to me isn't just about getting attention from the other convention go-ers. I like my costume to represent the character well and to improve the experience for everyone around me. I don't go to a convention thinking in terms of "me, me, me". I go to a convention thinking about how much fun I can have and how I can pass that off onto others. I don't worry myself with questions about if some "pervert" is fantasizing about me in his hotel room later on because the truth is, I don't care! And it's an individual's choice and right who they can fantasize about, as long as they aren't stalking me or impeding on my wellbeing.

If you are feeling very uncomfortable about what an attendee is doing towards you, or they blatantly crossed the line from legal to illegal harassing behavior, by all means speak up! But for anything less, I encourage you to think twice. Do you really want to be "that chick" who is telling people "Don't touch me!" or reprimanding another attendee for taking a picture of her eating a cheeseburger. These people are taking pictures of us because they like us and appreciate our costumes and/or physical beauty. Be happy about it. See the positive in this instead of focusing on what these people did wrong.  We represent cosplayers all over the world when we go to a convention in costume.

Your convention experience depends a lot on what you make of it. Enjoy it!